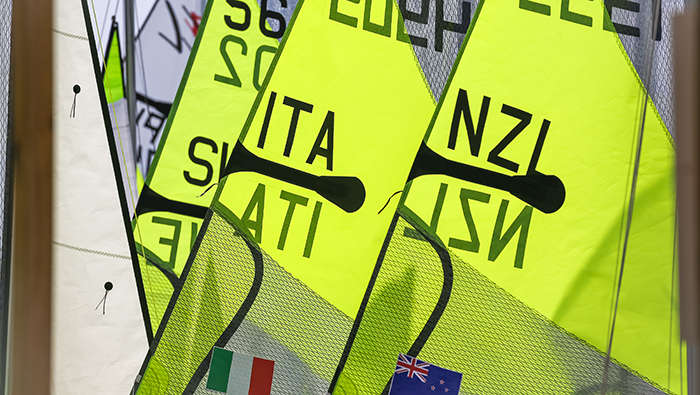 The second day of racing at the RS Feva World Championships 2019 greeted the sailors with glassy conditions. As the sun warmed up to over 35 degrees (!) a light breeze filled in.

Before heading on the water, the Chinese team talked about how, at the very last minute their visas were approved, and they arrived in Italy with only one day before racing started. “We are so excited to finally be here and be able to race. We came 2nd at Hong Kong race week so jumped at the chance to come to the RS Feva World Championships “explained the Chinese team from Guangzhou Sailing Club.

The fleet launched into another glamourous day of racing in Follonica Bay. Raulf Berry and his crew Ollie Peters continued their momentum, posting two bullets and a 10th. “In three words the RS Feva Worlds are competitive, sociable and hot!” Ollie described as he came off the water wearing a very fetching pink bucket hat.

Simon Cooke, multiple 470 champion, and Oscar Masfen had another solid day but as they arrive on shore they described the tense racing out on the course. “The British girls were so quick upwind!” explained Simon, “we are racing well and really enjoying ourselves!” With a grin on his face, Oscar added “It is so great to race against other countries and people speaking other languages. The RS Feva Worlds have been so amazing, fun and entertaining!”

Millie Irish/ Tasmyn Green and Gabriella Clifton/ Daisy Weston are currently battling it out in 5th and 6th place respectively for the first female title heading into the final series. William Pank and Sebastian Gotto from Norwich School, GBR, had a strong day posting a 1. 4, 3 after a rocky start.

The is a wrap on the qualification series as the fleet are split in gold, sliver and bronze where the real racing begins! Points are super tight so it is all to play for….