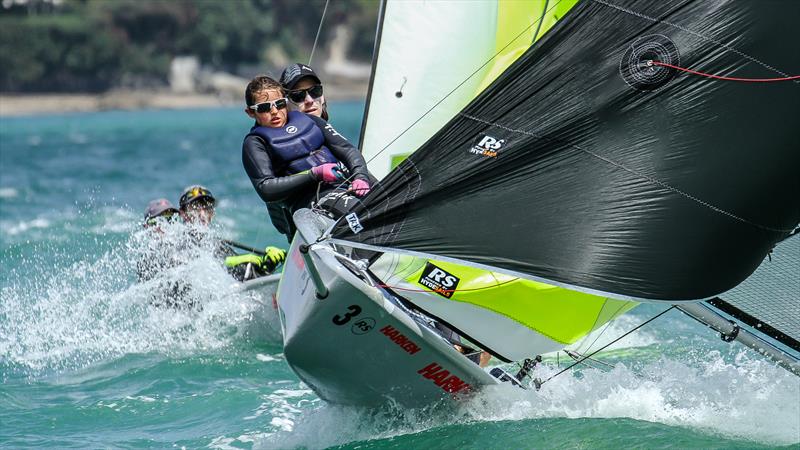 Ashton Williamson and Jack Parr being the top Youth crew were declared to be the 2020 NZ National Champions in the RS Feva class, sailed at Wakatere BC over the weekend.

Fresh winds shortened the regatta to six races. Four were sailed on Saturday with two on Sunday morning before racing was abandoned for the day. The event attracted an excellent fleet of 36 crews sailing in Open, Youth and Junior fleets.

This year the event was organised into four divisions to cover the wide range of skills and ages that the class attracts. All divisions sailed as one fleet.

Ashton Williamson (Wakatere BC) and crew, Jack Parr (New Plymouth YC) took out the Youth Championship division with an impressive display of sailing skills and sheer determination. In line with the International FEVA Association, the National title is the 1st boat, helm/crew aged 18 or under and was awarded to Ashton & Jack, the 2020 NZ RS Feva National Champions.

Finn Pye and Kosta Gladiadis from Manly took the Junior Championship win. Impressive sailing from a couple of 12yrs olds given the conditions.

In the 18 and under women’s division, skipper Daniella Wooldridge (Wakatere BC) and crew, Katie Mulcahy (Murrays Bay SC) took out the Women’s Championship, notching up some great top ten placings in races. The pair are a formidable combination, having taken out the Women’s division in the Sir Peter Blake Regatta at Torbay the previous weekend.

The regatta was deferred due to the COVID19 lockdown earlier in the year. The 2021 Nationals will be held at Manly SC in April 2021.