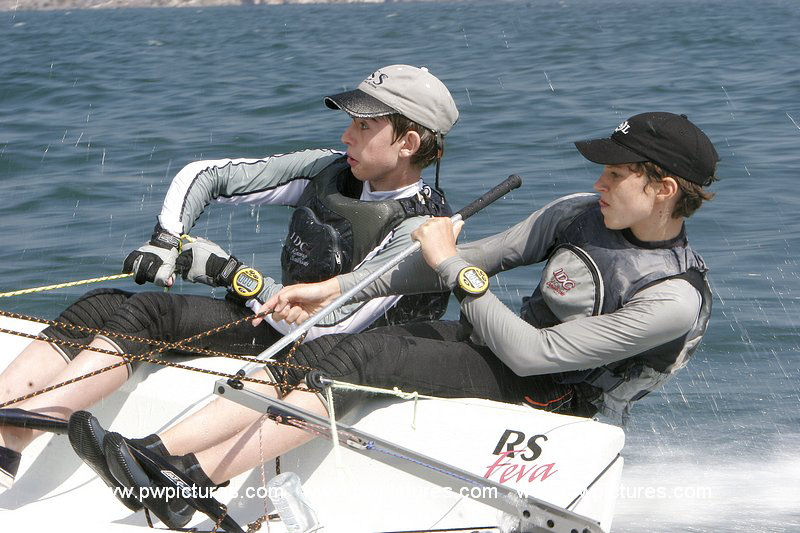 The RS Feva Sunsail Worlds were a resounding success at Brenzone, Lake Garda. Competitors came from 10 nations; 4 nations were represented in the top 11; top female helm (and all girl team) was 9th; 2 family teams were represented in the top 5 and the world champion is already involved in very successful 29er campaign. That’s what you call competitive and full on transitional preparation and training.

Conditions varied immensely compelling organisers to run 2 sessions daily with the morning session starting at approx 8.30 and being the windier with the Peler, and the afternoon session being lighter with the Ora and sometimes not finishing until 6.30. Given the inevitable lunchtime high jinks, water fights and kids lounging around on the jetty like a colony of basking seals the days were long and full. Given that locals said the temperature was a good 5C above normal in the very high 30’s this made early sleep impossible causing the candle to be well and truly burned at both ends.

The opening ceremony was conducted with typical Italian pomp, parades, speeches and a knees up in the town square. Competitors were introduced, some like Holly Tucker and Chessie Eyres involuntarily spoke on behalf of the GBR team and the Italian boys didn’t know what hit them when the GBR girls tore into them to swap team shirts right there and then. International co-operation was successfully set on its way with many a round eyed Italian male recovering from shock.

The leader board developed over the week into a number of dogfights that weren’t conclusively settled until the last morning when 3 races were sailed. The fight for top dog was resolved in favour of James Peters (fresh from garnering a 4th in the UK 29er champs) and Ben Gratton who eventually had a supreme effort rewarded by victory with one race to spare. Rob Cage sailing with daughter Georgie could under most circumstances have expected to win having won 4 races himself and discarded a 4th and a 5th in a very maturely sailed series. There was never a hint of trouble or protest involving Rob so he decided to do this for himself with questionable timekeeping. One day he arrived to rig his boat when the fleet was already almost fully launched (now that put a zing in his step!). This didn’t mean that James had it all his way and he had to survive a nervous protest for allegedly hitting a mark.

Keeping this duo honest was the battle between Italian genius Tita Ruggero crewed by Simone Dalla Rosa and Nathan and Anna Ackroyd. Tita’s immense performance was just enough to give them the final podium position. Nathan needed a 3rd in the last race with the Italians 9th or worse. The Italians did their bit but Nathan and Anna were 6th leaving them as the ones just missing out on the choccies.

There was then a big gap to 5th place with Swedes Jonathan and Rasmus Bergstrom. Jonathan is Rasmus’ 11 year old son and was assisted by the ‘old man’ helming in the heavier breezes and starting. Don’t bet against him though at the Europeans in Ireland next year when he will attend with his normal crew. They latched on to Oz Scully and Bethany Robson’s transom in the final race to prevent the overall positions from being reversed. So Oz and Bethany claimed 7th after a slow first half to their campaign.

The next 3 places were covered by only 9 points and the results could again have been reversed in the final race. Leading this trio were 2 more Italian lightweight boats including top juniors (combined age under 25) in 7th Vitali Oliviero with Maccari Federico Maria and in 8th Dubbini Leonardo with Tamburin Antonio.

Top female helm and first all girl crew were Alex Poyner and Holly Tucker in 9th after a superb series. They are clearly better at sailing than mountain biking down the 2000m Monte Balde – one made it without damage but the other… Completing the top 10 were Rupert and Hugo Jones-Warner who also took 2nd Junior (Jon Partridge – hero of the event- was overheard to say that Hugo (only 10! but fully up to speed on all aspects of Feva sailing) was going to be a sailing monster by 18 – yup, can’t see that assessment was flawed)

Charlie Esse and Mark Lees sailing in only their 2nd Feva regatta clearly have quite a bit left in the tank claiming 12th just behind the Polish boat of Ramian and Cappurro Matteo. They need to learn how to avoid having individual races with big numbers attached to them that spoil an otherwise great set of results. Other Brits in the top 20 were the hugely improved James ‘Bolly’ Bolingbroke and Matt Heathcote in 13th, Tally Eyres and Robert Palmer in 15th won the Thorpe Bay battle with Laura Sanders with Matt Purdon in 16th. The very young combo of Tim Gratton and Chris Taylor were a superb 18th (watch out for them…) whilst Jon Holmes and Hamish Ellis did well in 19th but what might have been without the OCS in race 6 that caught out some 10 of Britain’s finest and also 1 Italian…

Other notable performances came from Charlotte and Alexandra Coles who were third all girl youth crew in 27th who beat the fourth girl youth crew of Holly Watson and Britney MacKinlay in 28th. Next in 29th was another great performance by 11 year old Izzy Allerston who had the misfortune of having to sail with 4 different crew over the week. We wish Hannah Lane all the best and hope to see her back soon. Katie Polglase and Eilidh McIntyre also got some choccies but there are too many other performances to be able to eulogise everyone. Just check the results sheets!

The generous main sponsorship from Sunsail Clubs did much to ease the week and the secondary sponsors Craftinsure.com and LDC Racing Sailboats were essential to give the event that positive glow, keep the boats going when the going got tough and give the competitors a wide variety of great prizes. The Italians at the host Club in Brenzone worked tirelessly all week and showed that there isn’t only our British way of doing things. Thanks to all the above and also to the parents from all nations, including Belgium, Holland, Argentina and Brazil for the most enjoyable, if tiring event.

Having spoken with the competitors it would seem that there are some basic lessons to be learned for these (mostly) young sailors. The main one is that a championship requires a different approach to a shoot out. You can’t go for glory in every race, the event must be managed to eliminate as far as possible the major disasters, so banging corners isn’t often the right way to do things. When sailing abroad don’t expect things to run as they do at home, so this demands a relaxed view of events (should come easy to this lot!). Getting energy back in you quickly after a race keeps you going in the next one whilst keeping drinking helps concentration levels (parents aren’t to deliberately misinterpret that one!). 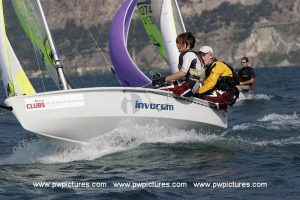