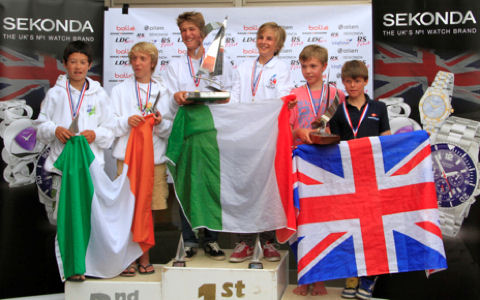 On day six one forecast had sailing being possible and one not. The latter was the correct one as it transpired. Latest start possible was 3pm and the race team led by Greg Wells and Mike Dawe tried their hardest. But with 3 different wind directions at 3 different buoys and 3 different speeds getting just a fair start would have been a feat. Games of pirates and Feva Flipping could only last so long. So when the plug was pulled at the point that the start sequence couldn’t be completed a new World Champion was found.

Leonardo Stocchero & Gianluca Virgenti were the deserving winners from Italy. This was their third tilt at the title and it couldn’t have been won by two nicer kids. The exuberance of the event was matched and more by the exuberance of the Italians at the prize giving. 14 Italian kids brought the house down by belting the anthem out. The closing ceremony had the Abarth Stunt plane put on a hearstopping performance. Airplanes really shouldn’t be able to do what it did. Jon Patridge from RS Sailing spoke eloquently and movingly about passion, sailing, family and friends.

A couple of thoughts before the list of winners: 4 different nations in top 4, Adriatic Weather conditions, feeling sorry for missing those moving on and up, feeling proud of the sailing skills and sportsmanship displayed, pleased for Leo and Gianluca and Italy, sorry for the big boys and girls who didn’t get to burn up the race track, amused at the Nations Cup (actually more like nearly died laughing!), loved the professionalism flexibility and friendly can do of HISC and all the volunteers.