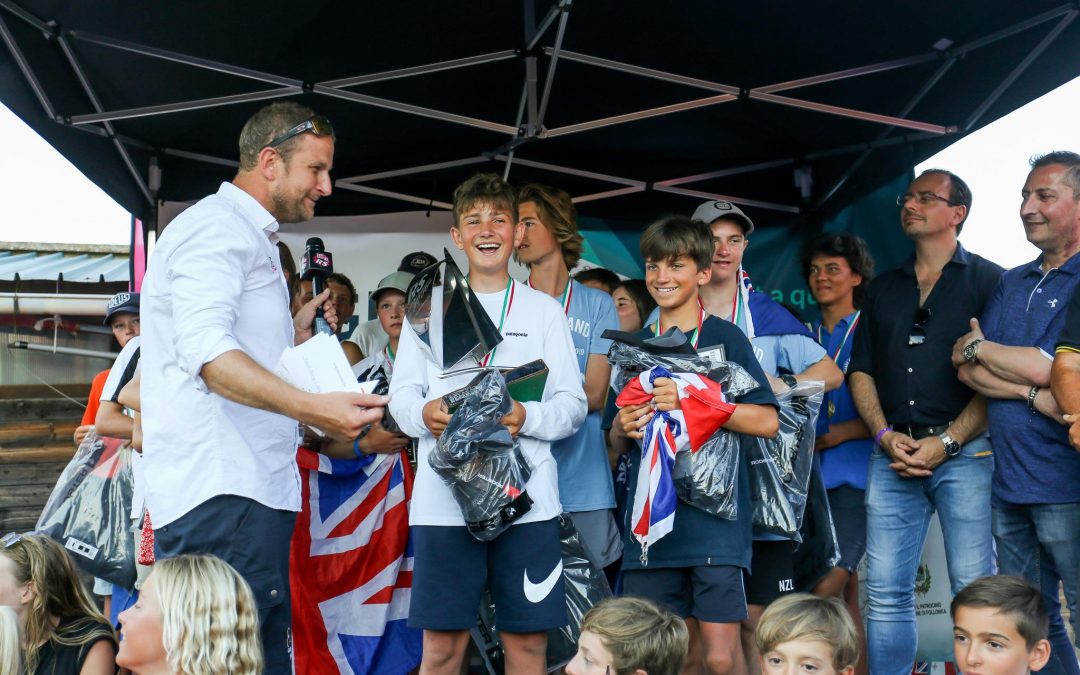 There was a buzz through the boat park as the sailors began rigging before the final day of the RS Feva World Championships 2019. Light winds greeted the sailors as they launched and the breeze teased the race committee but took a while to settle. Two races were completed before the World Championships titles were decided! The sailing club was decorated with every country flag as the sun set for a final time on what has been an awesome regatta.

In the bronze fleet, David Szmaragowski and Sara Svobodava held onto their lead but were being chased down by Gabriele Motta and Enea Beltrando who had an incredible day! In third place was Francesco Esposito and Lorenzo Grimaldi from team Italia. These sailors are World Champions of the future!

After pushing too close to the line on the final race of the day silver fleet leader from yesterday, Werpers Kenjeand Diego D’apote got black flagged which allowed Edoardo Savoldi and Lacopo Ariotti to sneak into the gold medal position! In third place, from Great Britain, was Beth Miller and Eilish Graham.

Gold fleet was led all day by incredible sailor Simon Cooke and his awesome crew, Oskar Masfen. It was a great honour for the RS Feva sailors to be racing in the company of Simon who has had such an inspiring sailor career. These two sailors from New Zealand claimed the Open World Champion title. The points at the top of the table were incredibly close but Alice Davies and Abby Hire finished in third place as first ladies with the New Zealand duo, Blake Hinsley and Nicholas Drummond in second. The 2019 RS Feva World Champions RaulfBerry and Ollie Peters from Hayling Island Sailing Club took the well-deserved title to cheers and woops from the crowd. They sailed an incredible series and Ollie Peters is now the first sailor to claim an RS Tera World Champion title followed by an RS Feva World Champion title in consecutive years. A massive congratulations to the boys!

A massive thank you goes out to everyone involved in the Vela Group, Follonica for hosting such an inspiring and fun event and to the mayor of Follonica for presenting the prizes, it was an honour to be invited to Follonica and the RS class would love to come back! An event of this magnitude does not happen just happen overnight. Lucy Jameson, The RS Feva International Class secretary put an incredible effort into making this the biggest event in RS history. Lucy works with a group of volunteers who help with registration, tallying, fixing boats, tidying the trolley park….. The list goes on!

In the famous words of Winne the Pooh, “we didn’t know we were making memories, we just knew we were having fun!”

As the sun sets in Follonica, RS looks forward to seeing you next year at the World Championships in Travemunde!