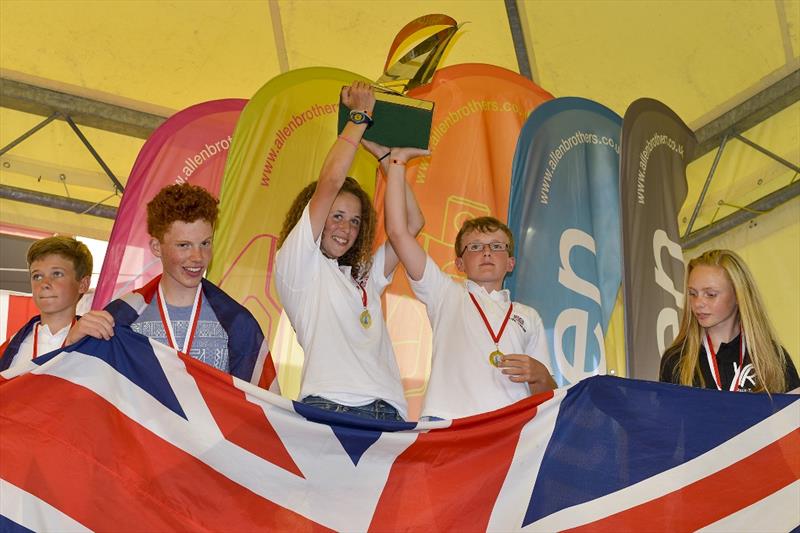 Marina di Grosseto, in Tuscany, Italy saw 173 RS Fevas, 346 sailors and numerous parents and supports from across Europe, North America and Russia descend on the venue last week for the Allen sponsored RS Feva World Championships. Having hosted the F18 Championships the week prior, the venue was well prepared for such a descent, and provided a superb range of sailing conditions for the competitors over the course of the week.

The first two days of the event made up the qualifying series for the split into Gold, Silver and Bronze fleet. Day one saw a strong attack from the Brits, as the Italian team and reigning World Champions, Leonardo Stocchero & Gianluca Virgenti, began their defense on home waters. British duo Elliot Wells and Jake Todd (GBR 4332) who finished the day on just 5 points thanks to one win and two seconds took the lead with the reigning World Champions teammates Margherita Porro and Francesca Andrea Dall’Ora (ITA 2592 – Associazione Nautica Sebina), hot on their heels in second after day one.

Day two saw the Italians improve their game as nine teams qualified for the Gold Fleet, with the earlier well placed British team still qualifying but with a tough championship ahead. Typically for Tuscany, the weather saw the first two days with good sea breezes resulting in a cooling effect on the land so by day three, slightly lighter conditions were in store.

British duo, Wells and Todd played the changeable conditions to their advantage, securing their lead at the front of the fleet after day three, with the reigning World Champions creeping up the leaderboard to third overall. In the Silver fleet, the Italians Tognoni/Quilici were in a battle with the Dutch duo Stroom/Dutilh securing first and second respectively at close of play.

Day four was a strong day for the British Teams as they dominating the top four positions, with the early leaders back up to second overall and they’re teammates Bristow/Hewitt taking the lead. The Italians had slipped to just below podium position, which was to remain for the final day of the Championships.

British Team Brostow/Hewitt (GBR 4610) took the World Championship title, with Wells/Todd (GBR 4332) in second and Brown/Davies (GBR 4768) securing third overall. The Brits dominated across the board, as Vennis-Ozanne/Lewis topped the Silver standings ahead of Italians Tognoni/Quilici and Mulcahy/Lindsay-Brown won the Bronze.

After a fantastic weeks racing president of the RS Feva International Class Jop Duthilh commented “We are very happy with the event, everything was perfect -from the courses to the organisation. All those involved were enthusiastic from sailors to parents to helpers. We are already setting our sights on the 2014 Worlds in France, for another brilliant RS Feva event.” The seventh edition of the RS Feva World Championships will be hosted by Yacht Club de Carnac, Bretagne, France from 26 July – 1 August 2014.