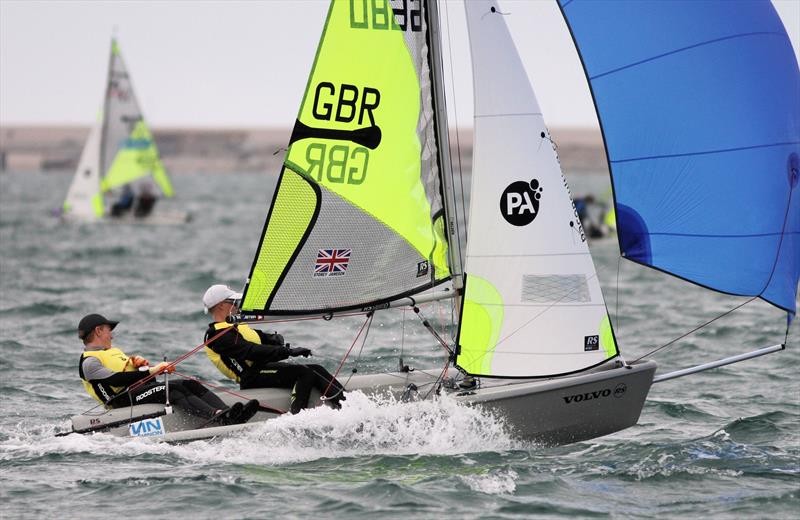 As part of the three week RS Games extravaganza, the Feva Europeans saw 114 boats from 10 countries attend. The Weymouth and Portland National Sailing Academy, UK, was buzzing with 205 RS Aeros and 170 RS Teras as the Fevas turned up and the Europeans followed the RS Aero and RS Tera Worlds

As part of the three week RS Games extravaganza, the Feva Europeans saw 114 boats from 10 countries attend. The Weymouth and Portland National Sailing Academy, UK, was buzzing with 205 RS Aeros and 170 RS Teras as the Fevas turned up and the Europeans followed the RS Aero and RS Tera Worlds.

The format was quite simple, with 114 boats the teams were flighted for the first two days or six races of qualifying and then split into Gold and Silver for up to eight further championship races. There were prizes galore to be won including top boats in silver and gold fleet, top juniors, top girls, top mixed, top families and many more. All was to play for.

The weather for the whole championship was excellent with conditions varying from light to moderate, the sailors were tested to the full without being put in “survival mode” and this meant that all the winners had to sail consistently in a variety of good and fair sailing conditions.

PRO Peter Saxton set the tone for the week with his to the minute accuracy and got the racing underway promptly. A relatively moderate first day saw a great start for Sophie Johnson and Dylan Collingbourne (GBR) along with Robbert Huisman and Gijs Zuidema (NED) and Angus Kilpatrick and Freddie Fisher (GBR) who made up the top three. Day two forecast was for strong winds in the morning so an early call by PRO to delay the start by 2 hours allowed competitors and their families a Sunday morning lay-in! Competitors hit the race course to be met by challenging but manageable and quite exciting conditions, the day one leaders all had good days but Ben Hutton-Penman and Abi Jayasekara (GBR) and Tom Storey and Rupert Jameson (GBR) both won two races each, other races were won by Sophie and Dylan and, a sign of things to come, Raulf Berry and Ben Bradley (GBR).

And so at the end of the six races of qualifying Sophie and Dylan led, followed closely by Ben and Abi and Tom and Rupert; Robbert and Gijs were fourth and Raul and Ben fifth. In Silver fleet our leaders were Blake Latta and Alice Smith (GBR).

In Fevas we carry qualifying places rather than qualifying points into the final series and this acts as a bit of a leveller and really does give everyone a chance of improving as the event continues. The next three days saw consistent and sometimes shifty winds and many place changes.

The front of the Gold fleet was very tight throughout the whole event but going into the final day, Tom and Rupert had a six point advantage over Sophie and Dylan, who had led each day until that evening. Also in the running were UK National Champions Will Pank and Seb Gotto (GBR) who had pulled themselves back into contention on the fourth day in third, and Ben and Abi in fourth. The final day saw two races and high drama. The first race saw our event leaders well down and having to fight back up, all the while Ben and Abi cruised off in the lead and closed the points gap considerably on all but Sophie and Dylan who came a very solid second. Tom and Rupes performed an act of mastery having to take matters into their own hands after rounding the windward mark in the 20s. They sailed the opposite side of the course to everyone, lit the boat up and sailed back into 7th place which just kept them ahead of Sophie and Dylan. And so to the final race, in short Tom and Rupert had to beat Sophie and Dylan and both boats had to be close to the front if they were not then Will and Seb or Ben and Abi would be waiting in the wings. It was tense, Tom and Rupert crossed the start line only to have to do turns due to a miscommunication between them and another boat but, again from mid fleet they fought their way through to finish in 6th, just ahead of Sophie and Dylan in 7th. Raulf and Ben won the race, Ben and Abi finished in third and in so doing closed a significant lead that Will and Seb had over them, and so it was Tom and Rupert crowned very popular RS Feva European Champions.
Silver fleet is sometimes blown away by some of the conditions we face but not this year. Tremendously tight racing throughout the event saw many places swapped. In the end it was Theo Bell and Hugo Cartwright (GBR), who qualified in 8th place in silver, they pulled through with some really consistent sailing including a first, two seconds and a third. In second place was Moritz Domok and Eva Klas (GER) who qualified 2nd and maintained their consistency throughout the final series and third was Sofia Delfina Gabricci and Sampieri Victoria (ITA). There were some really notable performances in Silver fleet including Millie Irish and TAS Green (GBR) who qualified in 32nd place but then got three bullets almost in a row to finish 12th, clearly from great sailing stock!! Also Patrick and Liam Whelan (GBR) who pulled themselves up from 24th after qualifying to a fantastic 6th. It was also nice to see a “blast from the past” make the silver fleet crew list, many current sailors will not remember but Matt Jayasekara (just got a place at Cambridge to study medicine and of course brother of Abi) used to be a superstar crew in the Feva and he stepped in to sail with Tom Hobbs and Tom clearly learnt from the experience as his results improved as the event went on.

So it is a wrap. Absolutely huge congratulations to our winners Tom and Rupert in Gold, crowned RS Feva European Champions, and Theo and Hugo in Silver. Congratulations to all the other various prize winners who are noted below. Another fantastic RS Feva competition where our happy sailors continue to impress. To our PRO Peter Saxton and his team, absolutely impeccable racing keeping our fleet engaged and safe. To WPNSA and the whole team, another huge thank you for having us and making us feel welcome. To all our sponsors but most importantly PA Consulting and Rooster for allowing us to host such a great event and give such fantastic prizes. And finally to RS Sailing and most importantly Jon Partridge, your energy and support for the class is amazing and we are thankful for that because it makes the whole experience brilliant and allows our sailors to be watched online by their parents (as tortuous as that sometimes is) and to have all the boats fixed so racing can continue.