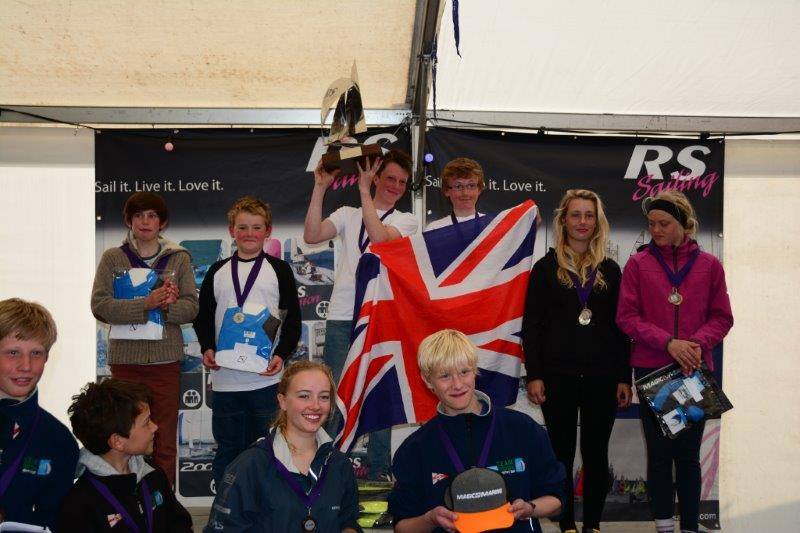 The RS Feva European Championships 2014 were held over Thursday 29 to Saturday 31 May at Aquavitesse, Bruinisse, Holland. Six nations battled it out for the honours – NED, CZE, BEL, LTU, EST & GBR. Competition was very tight until new UK Champions Harvey Martin & Bobby Hewitt blew everyone away with a stunning last 5 races – 1,1,3,2,1 to win with a comfortable 18pt margin.

Thursday dawned with a fair bit of cloud but a great racing breeze to get the first 3 races in. The day one leaders were Dutch duo Ties v.d. Stroom & Gijs Dutilh. At this point Harvey & Bobby were still settling in but lurked ominously for the others in 3rd place just behind Graeme & Madeleine Bristow. Czech girls Nikol Stankova & Veronika Piklova were 4th with Jack Lewis & Lucas Marshall sniffing around in 5th. Lithuanian pairing Simonas Jarsouas & Gabriele Petraityte made up a four nation top six.

Friday was just fabulous with a good breeze and sun galore for the four races. Harvey & Bobby found their Dutch sealegs and challenged all-comers with a good day ending with a perfect pair of bullets to go into the final day sat on top of the heap. Nikol & Veronika had hitched onto the leaders shirt tails and nipped into second while Graeme & Madeleine were still holding up Jack & Lucas.  The Dutch decided that scrappinig amongst themselves was just as much fun and took out places 5 to 8 with Bo v. Wendel d.Joode & Ties v.d. Ploegh doing the most damage.

After a fabulous Dutch sailors dinner and discs (music) on Friday evening Saturday dawned with the sun flowing over but the wind doing as promised and lurking around behind the bushes. As foecast however the breeze regained it’s confidence after a couple of hours and then steadily built all day to give fabulous conditions for the last three races. And Harvey & Bobby just nailed it. Making best use of the second discard kicking in Jack & Lucas managed to pull it out of the bag in the last race to snatch silver by one point from Nikol & Veronika. Getting the unenvied but massively well deserved leather medal were Dutch team Bo & Ties from compatriots Ties & Gijs and more compatriots Willemijn & Manus Offerman thus giving the home nation 4th to 6th.

A particular thank you must go to Aquavitesse and Richard & Marieke who did most of the heavy lifting in getting the event so well sorted on Site. They were helped immensely by the Race Team from KWV de Kaag who ran the racing itself. Gemeente Shouwen-Duiveland were instrumental with their support and of course the sponsors of the race dinner and prizes can’t possibly be overlooked. Thank you all – not forgetting of course the lovely parents who indulge their youngsters so much in the sport we all love!