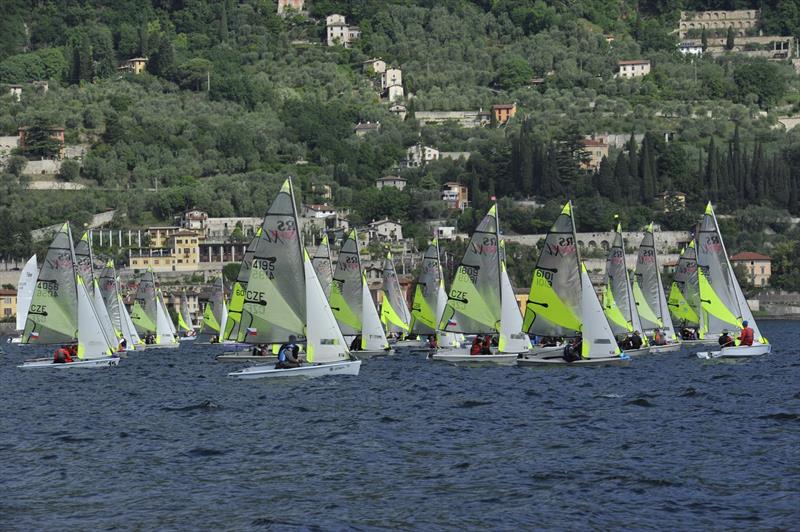 The 2015 RS Feva European Championships took place in a picturesque town square in Gargnano, Italy, bordered on one side by Italian restaurants and coffee shops and on the other by the unrivalled view of Lake Garda in all her glory! Held between 23rd – 25th May and hosted by Circolo Vela Gargnano, 81 teams from 11 nations gathered to compete for the European title and to enjoy the friendly buzz of the International RS Feva fleet.

Saturday brought a drizzly and overcast morning, a combination unconducive to allowing a stable breeze. A delay on the water ensued as the race committee waited for the breeze to stabilise before the first start of the championship could get underway. A light and shifty race saw British teams at the front and with the 2nd race of the day abandoned, the top spot overnight was taken by last year’s overall Silver medallists and Junior European Champions, Jack Lewis and Lucas Marshall (GBR). The hotshot female team, Freya Black and Hatty Cage (GBR) snapped at the boys’ heels to sit in 2nd place overnight.

An early start on Sunday with rising temperatures and sunshine meant racing was split between the morning and afternoon, offering a civilised lunch break when sailors could be spotted soaking up the Italian rays on the grass and crowding around the ice cream parlour in the square!

4 races saw all change on the leader board, and the fight thrown wide open with 4 nations inside the top 8. Daniel Lewis and Tristan Payne of GBR leapfrogged Freya and Hatty to take the lead, while the girls consolidated their 2nd position. Nicolo Codeghini and Edoardo Gamba of Italy finished the day with a ‘bang’, taking two bullets and firing them into 5th place overall in hot persuit of teammates, Mattia Zinetti and Davide Carbonelli who were just one place ahead. Meanwhile cousins from the Czech Republic, Jaroslav Cermak and Petr Kostal put in a strong performance to put them in 7th position overnight and Keith Luur and Rasmus Maalin from Estonia climbed to 8th overall.

The final day saw 2 morning races in a dying Northerly breeze. Lithuanian team, Simonas Jersovas and Kajus Oskutis won the day, heroically shooting up the score board from 13th to 6th overall. It was a close fought battle at the front as Jack Lewis and Lucas Marshall (GBR) snuck back into the lead, only beating the British girls, Freya Black and Hatty Cage on tiebreak. Jack and Lucas were crowned RS Feva European Champions 2015 as well as leading juniors for the second year running, while the girls took the trophy for the leading girls. Meanwhile Jaroslav Cermak and Petr Kostal (CZE) maintained their 7th position and took the ‘1st family’ prize and Keith Luur and Rasmus Maalinn (EST) finished 8th overall.

We owe a big thank you to our event sponsors, Magic Marine and Hyde Sails for providing prizes for all the deserving winners. Next stop will be the Crown Cup to be held on Lake Lipno in the Czech Republic from 20th – 22nd June. This will constitute round 2 of the RS Feva Eurocup Series 2015, and after 5 Nations filled the top 8 spots at the 2015 Europeans, it’s set to be an exciting year. The pinnacle of International RS Feva Sailing in 2015 will be the PA Consulting Allen RS Feva World Championships, which will take place from 18th – 24th July in Travemunde, Germany. There are already nearly 150 entries for the World Championships from 17 nations so competition will be fierce.