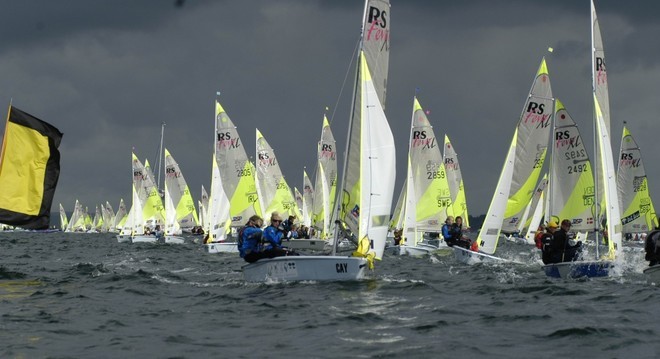 Consistency in not having a counting result worse than seventh and coolness in being able to refocus following a RAF in the first race of the day having just got a 2nd yellow flag from the splendidly efficient and hard working jury.

Knowing they had no more discards they sailed safe counting the points margins to their closest competitors. Some safe sailing – next two races were third and seventh!

Coming off the water Tim said that he just participated in the most awesome regatta and that the most difficult bit had been maintaining levels in widely varying conditions. Chris agreed noting that they had identified the potential for this to be a high scoring regatta and consistency was therefore likely to pay dividends, And so it proved.

It was only after a nail biting delay for the jury to consider a protest between the second and third placed boats that the final results could be proclaimed. Current European Champions Sofia Engstrom and Frida Langenius claimed 2nd place overall with a win in the final race to overhaul 3rd placed Edoardo Semezato and Ludovico Bonsi. The Swedish girls also claimed the title of RS Feva Ladies World Champions.

The final day proved to be no less testing than those that went before. The wind was medium and became lighter as the day went on. Focus was key after the great sailors dinner the night before that ended with a fantastic live band and lots of dancing. Our Swedish hosts have done a magnificent job all week and we can’t recommend them highly enough for the fantastic job done on and off the water.

You only have to look at the overall scores to see that nearly everyone had an off day for whatever reason at some point or other. James Bolingbroke and Gavin Page had the heartbreak of just missing the podium and must have bitterly regretted the day they posted an 18 and a 35. It was none the less a great recovery to finish fourth having been eighth at the start of play.

The Bellico siblings from Italy claimed fifth place and similarly must have nighmares about their last day posting 11,22,22. Alex Mothersele and Hamish Ellis nabbed sixthth place after a good final day but a poor penultimate day.

Most of the Brits had a good final day and that is of course down to the sailors mainly but coach Jonathan Lewis can also take a lot of credit for the way the entire GBR Team have performed.

The remainder of the top 10 were Italians Edoardo Marini and Stefano Balestrero in seventh, Swedes Jakob and Elin Klitte in 8th after climbing four places in a good final day, Italians Alessandra Moretto-Wiel and Bianca Maria Nuvolari-Duddo claimed 9th and 2nd Ladies with fast improving Alice Kent and Lucy Childs rounding it off and also being third in the Ladies category.

Saddest competitors of the day were probably the Irish duo Richard Harrington and Conor Lyden who had started the day in fifth but dropped to 11th overall following a jib halyard failure and two modest results in addition.

In the competition for RS Feva World Junior Champion (helm and crew both 13 or under on first day of event) there was also a clear winner. Swedes Douglas Afzelius and Martin Bertilsson clearly have a great future ahead by also coming in 16th overall.

Runners-up in the Juniors were the Dutch all girl boat of Maxine Jonker and Dewi Couvert whilst third place went to Will Lowes and Hugo Tucker. Whilst not an official category Ruth and Tess Allan (GBR) were second all girl Juniors whilst third all girl juniors were Julie Tingle and Alexandra Morehead.

The Silver Fleet also saw a dominant display of consistency by the winners Rasmus Persson and Kristoffer Lindh (SWE) who won by a massive 49 points from the Danes Fredrik Hvalso and Soren Steenstrup Zeeberg. Third place went to Mark and Myles Kelly (IRL).

In the all girls stakes in the silver fleet first place went to Swedes Johanna Smith and Lotta Olsson, second were Libby Watkins and Abbie Heathcote whilst third were Cathy Lear and Francine Counsell both (GBR).

So as per the Olympics the call is now for the world’s youth to gather again to compete for the Feva World Title in Sydney in January of 2010. Sailing out of the world famous Woollahra Sailing Club into Rose Bay and Sydney Harbour with Sydney Heads to the North and the Opera House and Harbour Bridge to the west will utterly unforgettable. A must do event! Before that we have the 2009 Europeans at the breathtakingly beautiful Lake Garda in Italy.

Next up here in Sweden are the Terras for their inaugural World Champs with some 50 odd teams from all over. This little nippers will soon be big nippers so we’d all better watch out!

Finally also good luck to the Mirrors who still have a few days to run of their Euros. Just to finish then a final thank you to our hosts who have put on a superb weeks sailing and great entertainment. If you were thinking of holding an event in Sweden and weren’t sure… don’t be, it’s wonderful.