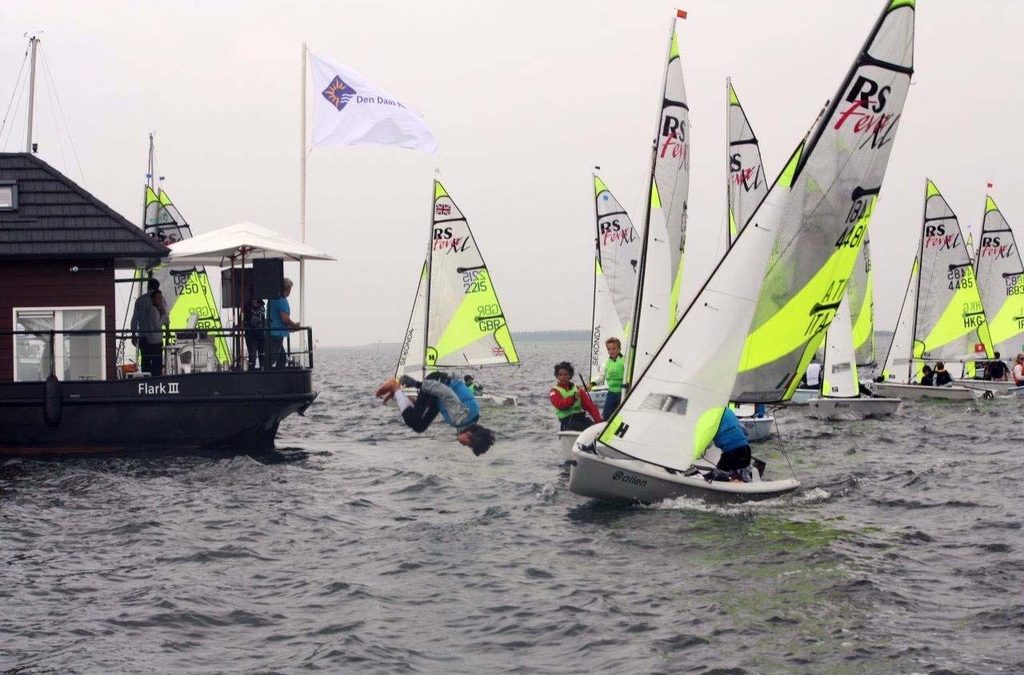 RS Feva Worlds tough competition till the end
by Golly Tucker on 3 Aug 2011
RS Feva Worlds 2011 Roddy BowermanThe Allen and Magic Marine RS Feva Worlds 2011 have now wrapped up. 160 RS Fevas from three continents gathered on the shores of a brand new major event location at Bruinisse on the Grevelingen Lake in Holland. The two day qualification series started with a proper blow. Had the blow continued there is little doubt that Jovian Short and James Barlow would now be World Champions such was their awesome dominance.

The wind then got much lighter and different teams took their turn at glory hunting. One day was canned due to inappropriately light wind but the fun was saved with aerobics and dance routines, beach volleyball, football and aquaballs.

By the final day it was a two-boat shootout and an opportunity for the Dutch girls Floor and Sterre Vrijenhoek to almost grab the Ladies Champions title as well as the bronze medal although they ultimately took first place not on podium . Ultimately Matt Whitfield and Scott Wallis sailed a brilliant series and are deserving World Champions relegating last year’s winners, Owen Bowerman and Charlie Darling to the Silver medal with Bronze scooped by Robert Baddeley and James Taylor.

Given the overdue nature (too much growing in the winter) of Short and Barlow’s move into 29ers, it was unlikely that they would maintain their first day dominance as the winds eased during the week. The strong breeze allowed the British Team, who have a preponderance of breeze during training, to dominate the leaderboard early on in the event. As the lighter winds came through the heavier teams like the above and the likes of Tucker and Collino fell away a bit whilst the lighter teams made their presence felt.

Matteo Pilati and Mattia Duchi from Italy put together a final two days (sixth), that repeated over the whole event would have had them nibbling away at the podium places. Debbie and Tommy Darling made a strong bid for the family award but two false starts put paid to their overall threat (fifth). Morgan Peach and Herbie Harford missed challenging for the Italians position in sixth by the margin of one poor windshift in the last race! Italians Leonardo Stocchero and Rainer Sanchez comfortably took eighth ahead of their compatriots Francesca Bergamo and Allessandra Dubbini who were also second ladies team.

Rounding out the top 10 were Father/daughter combo Graeme and Hannah Bristow who had marvellous moments including some good support from Hannah’s godfather on the blog! Third ladies team in 11th overall (on a tie break from the Bristows) were yet more Italians, Camilla and Giorgia Angiolini.

Leading British ladies team were Anna Prescott and Jess Eales in 14th overall (fourth ladies) and that was on a losing tiebreak from the top Estonians Georg Haud and Jaan Pihel. 12th were the leading Swedes Emil Andersson and Dennis Fonseca Karlsson. Top HKG were Matt Hollis and Scarlett Manzoni in 19th. Conor and Dab O’Beirne were the toast of the Irish during this rebuilding year following their stupendous success last year. Herman Bordal and Dominykas Rubinskas led the terrific Norwegians home whilst Pernille Husby Nielsen and Daniel Hannesbo were magnificent competitors for Denmark and would have given many more a fright if the Aeolius had puffed harder and longer.

Hugely satisfying to the class chairman (as that was where he learned to sail!) was the performance of Herve Houard and Yannick Bongaerts from Belgium who won the silver fleet. Second were Lucy and Sophie Caseldine whilst third was snaffled by Cameron Webber and Jo Fenwick.

World Junior Champions (U13 at end 2011) are Courtney Bilbrough and Orla Mitchell who sail out of Docklands Watersports and Sailing Centre, runners up are Caroline Heiberg and Marie Bordal (NOR) whilst third place was deservedly taken by two of the nicest Spanish kids ever Albert Gelpi and Eduard Boneta.

Bronze fleet winners were Emma and Jessica Scourfield who had an awful first day but were brilliant thereafter. They beat into second Veronique de By and Guus Dutilh from the home nation who bar for a slip on the final day would have been more troublesome whilst third was the ever-improving Samuel Grade with the incredible Katie Prescott who always seems to win something!

Special mention must go to DJ Henk who took his Disco boathouse out onto the course and entertained whilst the race committee was relaying the course. That brings us to the race officer – Peter Annick. If running a junior or youth event in particular, but I imagine the same for adults) you will not find a better man in Holland. I’ve never before had 14-year-olds come off the water praising the PRO.

That says it all and it wasn’t just the one who said that. The Royal Maas were just awesome in the depth and detail of their organisation. A worthy 160 boats to celebrate their 160th anniversary.

The Prom night was celebrated in fine fashion by all but the Irish outfits and the Hong Kong enthusiasm are worthy of singling out. It isn’t worth risking ones hearing and sanity by dragging the chairman onto the stage for some Karaoke either. The British coaches challenge in Aquaball (zorbing to some) racing clearly allowed the outgoing NJS coach to indulge in some sharp practice when his opponent mysteriously sank with the zipper having ‘failed’. And final mention to Richard and Marieka from Aquavitesse without whose tireless efforts on site nothing would have been nearly as smooth!

We’ll see everybody at next year’s worlds the last week of July at HISC. The Olympic Opening ceremony has been timed to coincide with the end of the RS Feva Worlds closing ceremony. I’m pretty sure it was planned that way RS Feva Worlds website

Sailed: 10, Discards: 2, To count: 8, Entries: 53, Scoring system: Appendix A
X
We use cookies to enhance your site experience, improve our understanding analysing our site traffic finally to enable social media features.
By continuing to browse, closing this banner, scrolling or clicking a link you agree to the use of cookies.AcceptRefuseCookie Policy
You can revoke your consent any time using the Revoke consent button.Revoke cookies