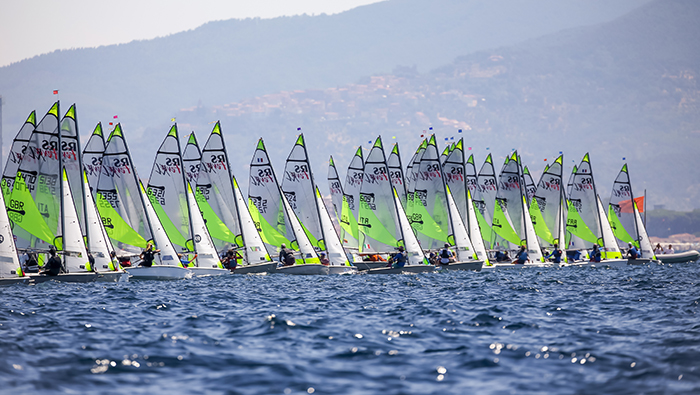 Light breeze challenges the sailors on day 3 at the RS Feva World Championships.

The RS Feva sailors arrived at the sailing club this morning, greeted by a mirror flat sea. The sea breeze struggled to make an impact, so after a short postponement, the sailors headed out to a patchy race course. The wind gave the race committee a tough job today, with large shifts and inconsistent pressure.

This is such an incredible event that sailors from all over the world try to raise money, to help fund their RS Feva sailing. Toby Hunt, from Norwich school explained “We did some fundraising to help with this trip which we do as a school. We decided to try and break the world record for the further distance sailed inland in 12 hours.” Norwich School uses RS Fevas to both race and train as part of their curriculum. “We sailed a Norfolk Punt which is a big, twin trapeze boat specifically build for the Norfolk Broads. We sailed from Beckles to Barton which is approximately 46 miles! Unfortunately, we did not break the record but we did manage to break the mast!” The team did an amazing job and raised over £400 which was used to support their team of 8 sailors

In the gold fleet, the New Zealand team, Simon Cooke and Oskar Masfen, did not let the lighter airs affect them and they extended their lead with 1, 1, 2. The dutch family team of Florian and Feline Vreeburg had a great day with two top 10 results, 8, 2, 9. The fleet were really pushing the line which led the race committee to display the black flag. This meant that any sailors over the line in the final 1 minute of the starting sequence were disqualified. Seven teams were removed from the final race of the day which has really stirred up the results. Alice Davies and Abby Hire (6, 9, 12) shot up to 6th place overall however, Millie Irish/ Tasmyn Green and Phoebe Peters/Rachel Pyke are currently 1 point apart and fighting to get back on top.

The conditions proved extremely challenging with big, unpredictable shifts. In silver fleet the british girls Charlotte Rankin and Lucy Mitchell had a smashing first two races but found themselves on the wrong side of one of the snakes, unable to find a ladder with a 2, 2, 48. Leading silver fleet is Werpers Kenje and Diego D’apote with 2nd to 4th places with only two points between them.

With one of the most consistent days of the fleet, David Szmaragowski and Sara Svobodova (1, 2, 3) have a dominant lead in the bronze fleet. Father and son team from China, Xiaoming and Star Ye, have had a consistent regatta which has moved them up the fleet into second place.